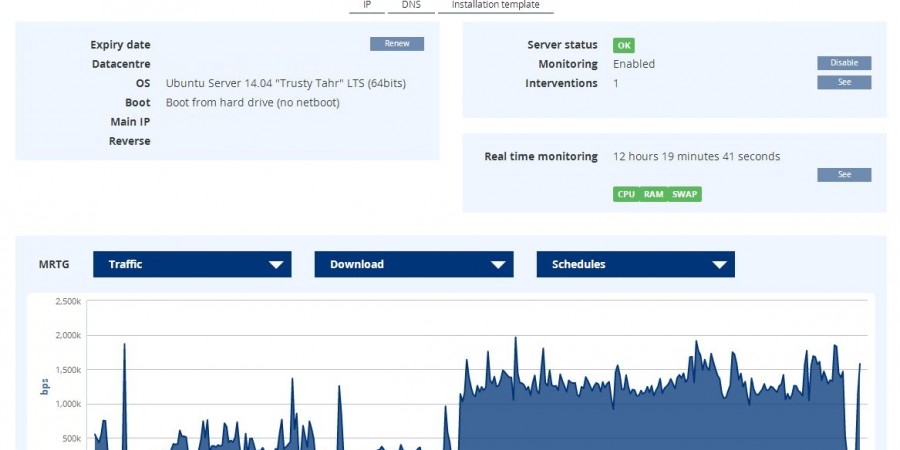 Dedicated Hosting at Shared Hosting Prices?! Kimsufi to the Rescue!

It is kind of hard to believe but you can actually get a dedicated hosting solution (your very own server) at shared hosting prices. It just boggles my mind that this kind of value exists.

I spent the last few nights and weekends (for the last 3 years… honestly…) trying to find a better web hosting provider. I run some legal file sharing sites and they require a lot of storage and bandwidth and they don’t generate much money. Most of my sites run on Drupal, which can be pretty processor hungry and database intensive under load. I finally came across this funny sounding French hosting company that has some of the most compelling hosting deals I have ever seen!

Okay… Now the highest “spec” plan I had was my MediaTemple DV VPS – It had 1 core and 2 GB of ram and a 20 GB SSD. However that is hardly any space, and the bandwidth was metered… badly at 2 TB/month.

—Short Aside about 1and1 “unlimited” hosting—
The second highest spec would have been with 1and1 – That was shared hosting but they guaranteed 2 GB of RAM and the sales person swore to me unlimited bandwidth and storage – I even explain I had 300 GB of files to move in for a legal file sharing site, she said that was fine. Later on it wasn’t fine and 1and1 support was really bad/very slow. They have “unlimited” storage that starts with a 50 GB Quota that can only grow by 1 GB/day. Support was horrendous and slow, however they did eventually increase that initial quota to 250 GB… the day after I canceled my plan.

The problem is even once they increased the quota on my “unlimited storage” to handle moving everything in, it can still only grow at 1 GB/day – so once the threshhold is hit it would have started breaking my sites (people wouldn’t be able to upload files for 24 hours). Anyhow, none of this was discussed up front even though I asked a lot of questions to this affect. I canceled before my 30 days was up.

This kind of thing is very typical of “unlimited” plans though which often have a slew of limitations, they are just high relative to the average user.
—-End Aside—–

In the end, I had my file sharing site over at dreamhost, my other drupal sites on my VPS and this wordpress blog on the VPS. IT was a big mess that I was paying about $35/month for. I was going to consolidate on 1and1.com but that was a fail. I looked at other VPS plans but they offered really limited storage (or charged an arm and a leg for more) or really limited bandwidth.

I never would have dreamed about going with a dedicated server, as the pricing is usually out of my range ($50/month for bare minimum, usually $140+/month). Then I started coming across dedicated hosting on old hardware. The prices were still a bit higher than I wanted, but they were attainable.

OVH, SoYouStart, and lastly, KimSufi – Dedicated Hosting for those of us who are broke
Then I came across OVH and their family of hosting companies, SoYouStart.com and Kimsufi.com. I actually was on SoYouStart and looking at spending ~$45/month for a box. They didn’t have any available though at the time so I called them up. The kind Canadian on the other end of the line told me availability is often scant because their servers sell quickly, he then asked me if I had looked at Kimsufi, this was their really bare-bones hosting… based on server tech from 3+ years ago. He said, it might not be sufficient for your needs…

I responded with “What can I get?”

Yeah… I kind of laughed out loud about the “not sufficient for my needs” statement. I got two servers from them (one of the atom servers and one of the core i5 boxes) for less than I was paying for my VPS + shared hosting. I have tons of storage, tons of ram, tons of processing power, and no limit on bandwidth. The Atom server will be for backup storage. I almost feel greedy here…

I mean, compare the third option to the Media Temple VPS… I have roughly the following by comparison:

What’s the catch?… You are truly on your own.

The catch is that there is no “hosting company BS” to get in the way. That is how I view it. Less experienced users are going to be really intimidated though. KimSufi gives you a server and an IP address and they will pre-install one of like 40 different operating systems for you (most are linux of some sort). And that’s it. You are sent some initial credentials and an IP address and you have some limited controls and monitoring from their dashboard.

Kimsufi isn’t going to manage your web-space for you though, they aren’t going to install SSL keys for your site, they aren’t going to even do domain registrations or DNS management. You are truly “master of your domain” here for better or for worse. They are not going to backup your system or upgrade it regularly. This is your box. They provide the hardware, the power, the internet connection, and some basic initial setup and management, that’s it. They don’t even install a LAMP stack out of the box. This lack of “help” is wonderful for some people and absolutely frightening for others all at the same time.

I absolutely love this. I really don’t want or need my host to install wordpress for me, or setup my databases for me, or manage backups, or manage cron jobs, etc. etc. What I need is a lot of power, a lot of storage, and a lot of bandwidth at a low price.

Is this for me?
If you aren’t used to managing a web/database server on your own, if you aren’t comfortable with linux and command line operations (yes you can install a GUI if you want but I wouldn’t recommend it for a web server) then you are going to be really lost most likely. I couldn’t have done this myself 5 years ago. I have learned the debian/ubuntu CLI in fits and starts for several years and am still learning more and more all the time. If you want to start doing just that, this could be the place. However this is a particularly steep part of the hill to start such a climb.

So, are you ready to sign up? I am just a customer for Kimsufi and I don’t have any referral links or anything to provide so all of the above is my more or less unbiased opinion. If you want to get started with them, check out the english version of their site:

I didn’t care so much if my server was in Europe, Canada, or the US so I just looked until I found one that was avaialable immediately. You might need to be more discerning. If you look through different data centers though you have a better chance of finding a server that fits your needs and budget.

I recommend the KS-2 or something similar specs wise for most users starting out. The Atom processor is plenty powerful and 4 GB of ram and a 1 TB of space is excellent.

PS – I might try to write some follow up articles along the lines of “I got my Kimsufi server, now what…”

One comment on: Dedicated Hosting at Shared Hosting Prices?! Kimsufi to the Rescue!