I have been taking a free networking class from Stanford University’s online “open source” education platform. I have really been enjoying the first unit of the course as it has started filling in some gaps in the foundation of my understanding regarding networking, the internet, and TCP/IP. I highly recommend this to anyone that has been in IT for a while but has never taken a more “academic” approach to their work. Okay, so that is my plug for free education. You can check out more here if interested: https://lagunita.stanford.edu/

OSI 7-Layer Model, TCP/IP 4-Layer Model
One of the gaps in my understanding of networking has to do with the OSI 7-layer networking model and the more simplified TCP/IP 4-Layer model (which was developed by DARPA? and predates the OSI Model). I didn’t even realize there was anything other than the 7-Layer model until taking this class and furthermore didn’t realize that while the OSI model gets talked about and referenced more frequently, academia (I think… and perhaps the industry) is shifting to using the simpler 4-layer model for discussion, understanding, and development regarding networking. Please don’t take any of this as gospel truth, this is just my understanding based on coursework and reading. I also find it much easier to think about and reference the 4-layer model. If you are curious how the two compare, this technet article is an interesting read, Technet: TCP/IP Protocol Architecture. Okay, so for this article, I will be sticking with what I am most comfortable with at this point and will be talking about and referencing the 4-layer TCP/IP model and discussing how VPN works.

Without going into (too) lengthy of an explanation, the whole premise of internet communication relies on the concepts of layering and encapsulation. The essential idea is that (in the case of the TCP/IP model) you have a four layer “stack” of protocols or technologies that are in one sense independent of each other, but each receives a “service” from the layer below and provides “service” to the layer above. The way this is done, in part, is via the concept of encapsulation. During end-to-end communication, each layer envelops (encapsulates) the layer above it. Furthermore, each layer is going to do its defined “job” regardless of whether or not the layer above it is working correctly.

A simple analogy is the postal service…

So that is a very brief (and I am certain utterly inadequate…) explanation of layering.

Regarding encapsulation… lets stick with the same analogy…

Your letter is put in an envelope. The envelope is picked up by a postal worker who puts it in a box with all mail destined for a certain zip code, and the box is kept on the postal truck. The truck travels to a distribution center where the box is unloaded and then forwarded on to another distribution center based on the zip code on the box. From here, the box (with your envelope containing your letter) is then placed on another truck. The trunk then goes to a specific address where a postal worker takes the envelope out of the box and delivers it to the recipient. The recipient then opens the envelope and reads the letter. Each “layer” encapsulates the other layers within it. The truck (part of the distribution network) holds the box that holds the envelope that holds the letter.

VPN involves “encapsulation within encapsulation” (my terminology at least) + encryption to achieve a logically “local” connection to a network from a remote host or location. Based on my reading I created the following diagram to help me wrap my head around it. 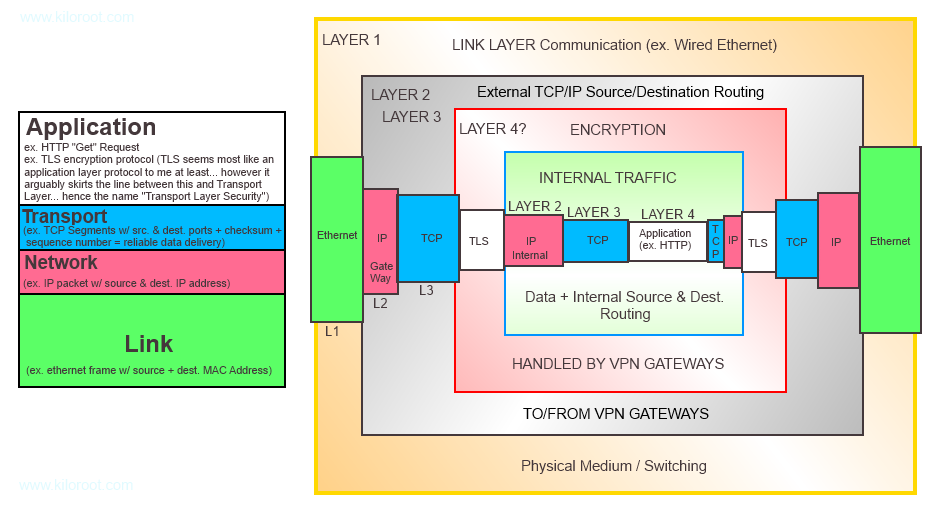 To explain the diagram in brief, on the left is the 4-layer TCP/IP model with an example given of what you might find in each layer. So we have the following:

However VPN does something interesting because we are talking to a different network but we want to make it logically like our traffic is on the same network… So what we do is encapsulate our HTTP GET Request (application layer) within Transport and Network layers that are intended for the local destination network… We then send this to our VPN Gateway (so the VPN client on your computer) which uses TLS to encrypt all of this information and then begins to package it all up (encapsulate) into another Transport Layer and Network layer for the purpose of getting all of this information routed to the destination network VPN Gateway. This all gets spit out over (encapsulated by) the Link layer. Once this arrives at the destination VPN Gateway it is “unpacked” down to the TLS encrypted data which is then decrypted and then the unencrypted Network Layer (which contains the TCP Layer and Application Layer data) is routed through the destination network normally (like other local traffic) and it all logically appears to be local because those inner Transport, Network, and Application layers were all packaged up for the destination network.

Furthermore, anyone that might “intercept” this traffic “mid-stream” as it crosses a public network (your ISP’s network or your local coffee shop wifi network, etc.) could see the source and destination VPN gateway addresses but beyond that will have no knowledge of the true source and destination client/hosts nor of the data being exchanged between them because all of this is encrypted via TLS.

Anyhow, I realize this article isn’t exactly exhaustive and I am hoping it is (at least) accurate. I just wanted to do a write-up of this as it helps cement a rather complex concept/framework in my head. I do hope it at least has shed some light on the topic for you and perhaps piques your interest and causes you to do a bit more digging yourself.